I decided that my first stop on this year long journey would be the furthest place from the United States, that just so happened to be Australia. This has been a country that I have only ever dreamed of going to one day.  A friend of mine recently returned from Cairns, Australia and only had the best things to say about the city so I decided that would be my first stop. After what seemed to be a 35-hour flight (JFK–>LAX, LAX–>SYD and SYD–>CNS) I finally arrived. For those of you who do not know, Cairns is closer to the northern tip of Australia and a huge tourist attraction because of the Great Barrier Reef.

Because of the constant hustle and bustle of NYC, I was ready to take this week and a half here and simply relax and catch a nice tan. The first couple of days, I walked around the city (very small perimeter), caught some rays down at the Lagoon, went to the Botanical Gardens, hiked a couple nature walks and read a couple books. I certainly can say that I was absolutely relaxed as I tried to settle down with my newfound life of being a traveling nomad. For those of you who do not know, Australia is apparently missing a layer of their ozone which makes the sun and the UV rays that much more intense, well I guess I learned the hard way because the first 3 or 4 days I got absolutely roasted. My colleagues had warned me beforehand to wear a ton of suntan lotion but I thought reapplying 50 SPF every couple of hours would do the trick, oh boy was I wrong! I think I finally learned my lesson after I fell asleep at the lagoon on my stomach, when I woke up my legs were completely burnt and swollen – that evening was not the best for me while trying to sleep away the pain.

After the burn subsided, I embarked with a tour group out to the Daintree Rainforest. This two-day journey was the highlight of my trip in Cairns so far. Before getting to the Daintree Rainforest, we stopped at a UNESCO World Heritage site to visit some Australian wildlife. Here I was able to feed Kangaroos, hold a Koala, gawk at a 9ft Crocodile, listen to the sounds of the birds and gaze at an endangered dinosaur bird, the Cassowary. Since the wildlife is unpredictable in Australia, this was the perfect way to see all the native animals all in one place.

After a couple hours exploring the different wildlife that Australia has to offer, we hopped back onto the bus and made our way into the Rainforest. Below are some fun facts I learned on the way to the Daintree Rainforest –

Once everyone finished their lunches, I was the only one who extended their stay overnight in the Rainforest so I had the rest of the afternoon to myself. While we were heading to the campgrounds that I was staying at, I noticed that we passed an exotic fruit farm a couple km’s back that I was interested in. I decided to venture into the Rainforest following the same road the bus took to look for this fruit farm. After a 45 minute walk with no cellular service or Wi-Fi, I finally got to the driveway just in time to start the 2pm exotic fruit tasting with 6 other people. I had no idea what I was about to taste but I was excited to try some new foods and get my palate wet. Sam, the young gentleman who worked and lived on the fruit farm was very knowledgeable of the origin of the fruits, how they were grown, how to properly eat them and how much their farm can make selling to wholesale vendors down the coast of Australia. Within the 90 minutes, I was able to try and learn about 11 new fruits that I never knew even existed. Below I listed each fruit I tasted and my opinions along with a slideshow of pictures from the tasting –

After the exotic fruit tasting, Sam handed me a map of the Rainforest grounds where I could walk on the Dubuji Boardwalk through the mangrove swamps to the beach. From the southern beach, I made my way 4km up north to the Cape Trib Beach House where I was staying that evening. The beach only had a handful of people on it so it was very peaceful and relaxing to walk home listening to the waves crash down. I stayed at least a good couple of yards away from the water since there were warning signs along the coast because Crocodiles live in the water here (VERY dangerous).

The next part of the evening was very unexpected. I was absolutely exhausted by the end of this day after walking in the hot sun through the rainforest that I almost didn’t go down to eat dinner until I heard that there was going to be a fire show on the beach. I made my way to the beach but before the fire show started I was in awe of how the stars were glowing in the sky. I guess I have been living in NYC for so long that I forgot how beautiful the stars look at night when you are in the woods. As I looked up in awe around me, I instantly had goosebumps because of how gorgeous the sky looked and how peaceful it was to step away from everything and listen to the waves crashing down, the frogs ribbiting in the forest, and the birds singing to each other. This was the first time during this trip that everything became real for me and got me excited to see what the future held. It suddenly became real that I was about to see the world in a whole different perspective for the next couple months and be mesmerized by the sights, the sounds, the cultures and the people of the world. As three younger hippie looking people danced around on the beach with fire flaming hula hoops, fire torches and fire sticks to indie music, this was the perfect ending to an incredible day.

After a quick breakfast and some yoga on the beach, I got all my gear ready to hit the road for some snorkeling. Luckily I had some practice under my belt in Hawaii so I wasn’t brand new to the underwater lifestyle. We departed around 8:30am on a boat heading towards Mackay Reef where we would see two different dive sites. It was a short 30-minute drive out to Mackay Reef where there was a small island where birds nested and the corals around it. Before we were able to jump into the water, we had to wear our stinger suits to protect us from the jellyfish that resides in this area. Some of the jellyfish can be so small you can barely see them but they can have tentacles that reach 5-7 feet long! You will see in all my pictures below that I have a full stinger suit on for precautionary measures. For the next hour, I went through the different corals and interacted with the largest sea turtles I have ever seen as well as a mini shark! I thought I had seen the best in Hawaii, oh boy was I wrong. The underwater world was jaw dropping with the most colorful corals, exotic fishes, large sea turtles and baby sharks all swimming around me. During the next couple of hours, I swam alongside numerous schools of fishes and got up close and personal with the largest clams that I have ever seen. The pictures below does not even begin to describe the experience I had at Mackay Reef. After the three hours we had to snorkel around the corals, I was absolutely exhausted. I had totally worn myself out trying to keep up with the sea turtles and the school’s of fishes. This had totally opened my eyes up to how much of the world I did not know existed under the surface, it also got me really excited to get PADI certificate in Thailand in the upcoming month! This was an experience that I will never forget and hope to come back and see with my kids one day.

Right before I jumped in

First starfish of hundreds that I saw 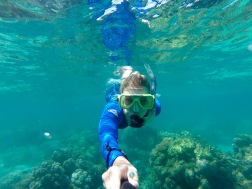 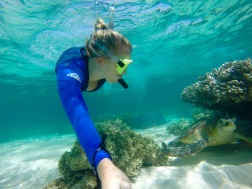 Me and my sea turtle friend 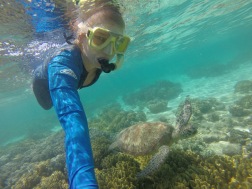 Mr. Sea Turtle breezing on past me 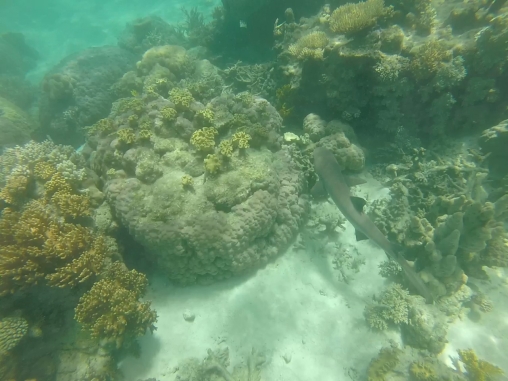 SHARK!! This was a gentle shark, I don’t think it even noticed that I was tailing behind him for ten minutes.

The largest clams ever!!

Just me and my clam!

Just swimming through the corals 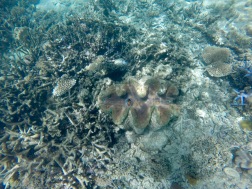 Large clams underwater, the tour guide said these are over 200 years old

Interesting fishes, must be a brother and sister!

This fish was taking a bathroom break! 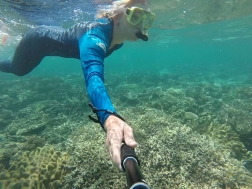 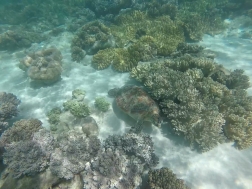 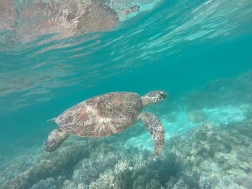 Admiring the beauty and grace of the shark.

The shark and I

After the epic Great Barrier Reef tour, we stopped for a quick lunch and I went back on the bus to head back home. Before getting to Cairns we went on a Crocodile Boat tour. Because of the heat, the crocodiles in the wild did not want to be found. Unfortunately after an hour boat tour up the river, we were not able to see any crocodiles, they must have all been hiding under the water or in the shade. Fun Fact – Crocodiles can hold their breath for up to 2 hours, WOW!

Scouring for Crocodiles….none to be found!